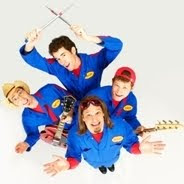 What would happen if the Beastie Boys collaborated with Mr. Rogers?

The answer is found on the Imagination Movers’ three critically acclaimed indie CDs: “Calling All Movers,” “Good Ideas,” and “Eight Feet” and their first national release “Juice Box Heroes.” Oh and don’t forget they also have an award-winning, grass roots DVD “Stir It Up” to throw in the mix too.

Indeed, the Movers sing about things they know: messy rooms, healthy snacks, sibling rivalry and other topics that relate to being a little kid. Their musical style, however, would sound right at home on a weekly MTV countdown.

The Movers – Rich, Scott, Dave and Smitty — began in New Orleans in 2003 and now are fast-rising stars on the national kids music scene thanks to their combination of radio-friendly songs, kid-friendly themes and dynamic live shows. In concert, the Movers teach high-energy dances, play games with the audience and make music on their one-of-a-kind trashcan drumset. Kids and parents help perform new kids classics like “Shakable You,” “The Medicine Song,” “What’s in the Fridge?” and “I Want My Mommy (Time for Bed).”

The Movers are a big hit on national satellite radio and Radio Disney, where many of their songs remain in heavy rotation. They have also won a total of 14 national music awards and were named a “Parenting Pick” by Parenting Magazine as far back as May 2005. Even now, an ongoing tour of U.S. cities creates new Movers fans (affectionately known as “Gearheads”) in the wake of every show.

Based largely on the original concept created by the Movers themselves in 2003, Disney Channel debuted a new television series in 2008 featuring Rich, Scott, Dave and Smitty as blue-collar brainstormers working hard to solve “Idea Emergencies” in their Idea Warehouse, a clearinghouse of infinite inspirations. Through songs, stories and hijinks, Imagination Movers moves kids to exercise their bodies and brains.

Movers motto for everything in life is to “reach high, think big, work hard and have fun!” The Movers themselves are leading by example as they captivate new fans daily with their winning sound and style. ~ imaginationmovers.com/website/about_us.php