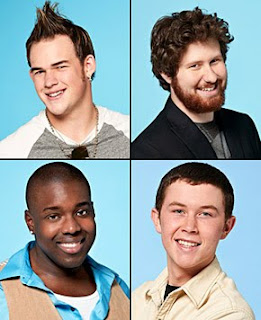 We are finally on the big stage! The Top 12 male contestants of Season 10 performed live for the first time last night. This season the stakes are even higher for this first performance, Thursday night they will make cuts down to the top five guys chosen by the voters, and then the last 7 guys will get a second chance to perform for the judges’ wild card pick.

(The Top 12 female contestants perform tonight at 8pm/EST on Fox)
I thought there were a few guys who clearly stood out from the pack. First being a calmer Jacob Lusk, my family seemed as touched by his performance as the judges. I got a text right away from my step-mother saying he made her cry and she also thought the same as J.Lo, that he sounded just like Luther Vandross. Steven Tyler said his rendition of “A House is Not a Home” was “divine intervention”. Also Jacob, loved the suit!
Scotty McCreery, (although I am not a huge fan of country, even though my Dad is trying to get me to be) there is something about his voice that is so unique, so interesting, I could listen to him over and over again. He sang “Letters from Home”, a John Michael Montgomery song that could have not been a better choice. If we have learned one thing in the last nine seasons of Idol, it is that song selection can make or break you, and Scotty’s song will definitely help to make him the artist he wants to be. J.Lo told him it’s what he was born to do, and I have to agree.
Unlike Jordan Dorsey’s choice of Usher’s “OMG”, I am left to ask “Why?? Jordan, why??” I don’t remember seeing much of him during the Hollywood weeks and while I would trust that he can sing, we weren’t given any indication of that with last night’s performance. Even Jennifer asked him if this was the kind of artist he wanted to be and he told her straight out “No”, so then why?? Why pick “OMG”, that song shouldn’t have even been allowed on the Idol Stage, “OMG” should be left for my gym mix or to hear at a club, not ever on American Idol.
James Durbin took the stage and sang Judas Priest’s “You’ve Got Another Thing Comin’”, another example of excellent song selection that made Steven yell “That was f***** crazy good!” (Also, the first time a Judas Priest song has been attempted on the Idol stage). I loved watching him through his first audition; they showed his background story about how he struggles with being autistic. They showed B roll of his wife, his son, and how his wife writes affirmations on Post-It’s through out their home. Although James has a touching story, he is also an incredible singer who showed significant control last night (even the scream and jump at the end were fitting). I also think he is a great role model for children living with autism to watch him and see what he can accomplish… we are rooting for you James! 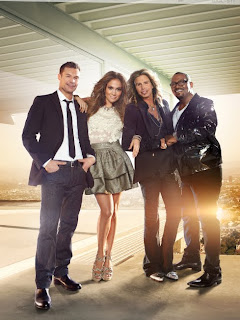 Last night Casey Abrams didn’t have any large, unique instruments with him, and he didn’t need them. He sang “I Put a Spell on You” and clearly stood out and put a spell on me. I think it is his ‘confident with a touch of modesty’ personality that has me becoming a Casey fan.
I also have to say I really enjoyed Paul McDonald’s version of Rod Stewart’s “Maggie May”. I didn’t notice him until the end of Hollywood week, (I think I was in my little Chris Medina/Jaycee bubble), but this guy can sing. I love his soft raspy voice, and I also happen to love his smile.
I do have to admit though, last night for the first time all season, I really missed Simon. The judges have been great so far, critical, funny, entertaining, but last night I was waiting to hear the things we were all thinking but could never say… and I didn’t. I wanted to hear those remarks were I thought “Ouch! But SO true!” I am hoping the judges were just being nice on the first night and that this changes as the season progresses.
Ashley lives in Bucks County with her husband, their two children, and their shih tzu. Ashley worked in television production for years and now enjoys writing about television, movies, and parenting topics. For more TV, film, and entertainment info check out www.ashleykanoff.com