Earlier this week Megan (from Delaware County Moms) and I, with our 2 year olds in tow, were able to get a sneak peek at the new Philadelphia Zoo exhibit X•tink•shun which opens tomorrow, April 9th.

The Philadelphia Zoo has partnered with The Jim Henson Company™ to present this wildly amazing puppet experience. This exhibit spans the entire zoo with a cast of puppet characters led by members of endangered, and in one case extinct, species. Located throughout the zoo on Bank of America Eco-Stages, each puppet character educates and engages their audience on the plight of endangered animals and habitats. The upbeat message tells the “tail” about how visitors can make a difference. Each message encourages the need for humans to find creative ways to protect habitats and co-exist with animals to change the world for the better by bringing about the x• tink• shun of extinction.

What We Thought
The puppets are simply brilliant, but of course I wouldn’t have expected anything less given that they were crafted by The Jim Henson Company. The detail and craftsmanship was evident as these puppets preformed. The puppeteers were also above par with their ability to capture the attention of my son by moving the puppets in dance as well as during their speeches about their possible extinction. 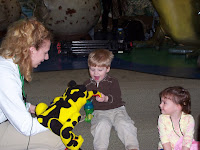 It’s been a few days now and I’ve shown my son the picture of the cast of puppets. We talk about how we can see all of the animals, with the exception of Didi. We talk about how the other animals live at the zoo or in far off places that we can visit, but that to see Didi we have to pretend. He’s 2, so that is about the extent that I think he can grasp the enormity of this message. He does tell me that we have to pretend with Didi but that he was able to shake Phibi the Frog’s hand (pictured left), so something is sinking in. Ultimately, it’s never too early to begin talking about conservation and extinction with our children. You might be surprised by what they recall and, as they grow, how these experiences shape the impact they make on the world.

Show Information:
You can check out more information at the exhibit-specific website: www.Xtinkshun.org
Opens: April 9, 2011-October 31, 2011
Cost: Free with Zoo visit
Time: 10:00am-4pm
Performances: Performances are scheduled every half hour and hour. The SEPTA’s Save Our Species Parade Times: 12:00pm and 3:30pm

*Disclosure: Philly Burb Moms were provided free parking and access to the zoo to preview this exhibit. Exhibit information provided by the Zoo. The photo of the puppets is courtesy of www.xtinkshun.org. No compensation was received for this post, and as always, all opinions are strictly my own.