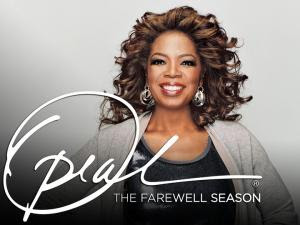 When thinking of what to write my blog about this week, even with the finales of Dancing with the Stars and American Idol, and my favorites Modern Family and Cougartown, there was something overshadowing every single season finale….Oprah’s last show!

Oprah Winfrey’s final show aired yesterday. (May 25, also my husband’s birthday, which was also overshadowed by Oprah’s last show!) Yesterday’s show marked the end of twenty five landmark years, and we have all been there watching along the way (although I don’t remember when I started watching, I would have only been about 7 when she began, but I am sure I still probably caught a few episodes that year!) This week has basically been a three day goodbye. Monday and Tuesday Oprah taped in the United Center and it was awesome! Oprah didn’t have anything to do with either show, and instead both shows were completely produced by her staff, inviting some of their boss’s favorite celebrity friends to perform and say goodbye.

Oprah did want yesterday’s last show to be a mystery. As much of the Monday and Tuesday show details were leaked, Wednesday’s finale was not. For the finale episode, Oprah ending up delivering, what she called “a love letter to her fans”, she had no guests, no giveaways, no special segments. Just an hour of Oprah telling her audience how she felt about the last twenty five years. She said sometimes she was a teacher but most of the time her viewers instructed her. I have to say Oprah has definitely taught me a lot. I have these daily planners I have used for years to write down notes or plans, if I look back they are filled with little “Oprah quotes” or things I heard on her show. Anything I heard that I thought would help me be a better person. She has guided us, inspired us and I will truly miss her. I also loved embracing the books she suggested. One of the best messages I took away from the Oprah show was to enjoy every second. If I would be running around, so busy all day and randomly end up back at my house with Oprah on in the background, I may here a heartbreaking tale, maybe one that especially hits home because it deals with children… I would just think, slow down… hug your kids. By the time my children woke up from their naps, I would do just that ~ slow down, hug them. I wouldn’t worry if the laundry wasn’t folded or the dishwasher wasn’t unloaded, I would stop and hug them, spend quality time with them, and for that, Oprah, I thank you.