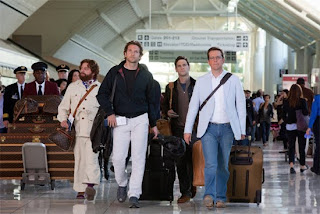 Even though it came out almost two weeks ago, I couldn’t write a blog this week and not talk about one of the summer’s biggest hits…. The Hangover Part II!

Of course, because of my love for Bradley Cooper but also my love for this entire franchise. Now, while it hasn’t been getting the best reviews I still am going to suggest you see it. For me, it’s just as simple as “Did I laugh? Did I have a good time?” And the answer is, YES!! I saw the film with my husband and sister and they were both hysterical, as was the entire theater, which was packed by the way. We even missed a ton of lines because we were laughing so hard, I already can’t wait to see it again. I have read a bunch of reviews for the film, some good, some not so good, but I think one thing everyone said is they still laughed throughout, it is hard (if not impossible) not to. The Thai setting is incredible, Todd Philips may have made a choice to use the same plot structure but as the first but he also chooses to show off the beauty of a new landscape, and the seediness of the night life. The cinematography is absolutely breathtaking, and the views of Bangkok are exceptional. 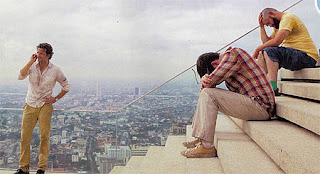 I also basically knew what to expect, I knew that they had consciously planned to use the same exact formula this second time around. Bradley had also mentioned they were having Phil make the same phone call, there is someone missing, a ticking clock, ect. It is a darker, raunchier (so be prepared!) version of the first installment, but I also thought it made it interesting to watch they really stuck to the same recipe for disaster.

I enjoyed the way the film handled the fact that the same events were unfolding; besides Phil’s phone call (“It happened again.”) they were able to do this without the added redundancy of the characters fully acknowledging it.

They took some of the favorites from the first film and built on them, the photo montage (that was even funnier after watching Bradley’s interview on Conan, if you saw it you know what I mean.) Stu also has a new song, I still like the first one better, but this one is great too. I think I could listen to Ed Helms just make up random songs all day. Zach Galifianakas is the same hilarious unpredictable Alan who can be offensive yet sweet (“I don’t get it. Is this a magic show?”)

It does lack t 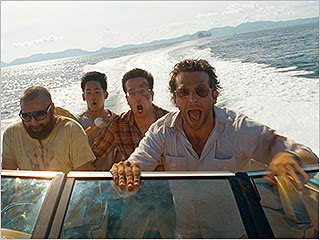 he element of surprise that the first one had, but instead of that you come in with a previous knowledge of these guys you saw two summers ago. It is our same old wolf pack that you already invested in. I enjoyed just watching the banter between the characters; I don’t think it ever gets old. Rumor has it they have already hired a writer for The Hangover Part III. Bradley has expressed he would love to do another but the third would depart from the other two. I can’t wait, I would love to watch again as these guys grow and go on another adventure, especially one different from what we’ve seen so far.