Google+
There is something about playing with modeling clay or dough that everyone seems to enjoy. This craft idea for a homemade recipe for play dough scented with Kool Aid drink mix was given to me by a friend. She found that if kept in a sealed container, such as a zipper baggie or closed container, the dough kept for a remarkably long time retaining it’s scent. 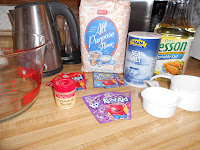 A quick search on the internet revealed many different variations on the recipe, so I decided to start with the following recipe, adding more flour as needed:

2 (1/4 ounce) packs of Kool Aid, same color
1 teaspoon cream of tartar
2 cups boiling water
3 tablespoons of oil
In a mixing bowl with a silicon or rubber spatula, combine the dry ingredients. Slowly add the boiling water and the oil and mix well. I found that I needed to add a bit more than an extra cup to the cherry dough, whereas I only needed to add about a half a cup of flour to the blue dough to make it less sticky and easier to work with . The dough will be very hot. As it cools, it will solidify a bit more and will be easier to knead. I decided to make the dough without my child, since it was working with boiling water. An older child may be able to mix up this recipe on their own or as a helper. 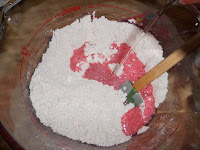 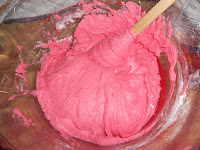 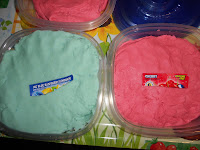 I made this dough recipe for our family 4th of July get together, which is why I tried making blue and red dough. I gave the kids some plastic knives to use with the dough, but cookie cutters and a little rolling pin would be fun to use as well. This was a hit, especially with the littlest kids who lloved digging into the containers of play dough. 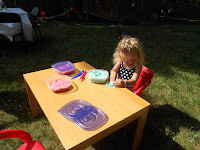 This was a fun summer time craft, as when played with outside the mess is minimal! Happy crafting!

You can find more crafting ideas and other adventures with a preschooler on Diane’s blog, Knitting Zeal!