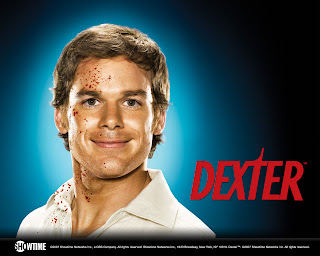 I was really debating writing about Dexter for my blog this week, I guess at first I was thinking it may not be the most “popular” show to discuss for a “mom blog”, but it really has been all my husband and I have been watching for the last couple weeks. Also, my friend who suggested it (& kept telling me how much she loved it) is a mother of four, and I know many other moms who are obsessed with the show as well.

My husband and I never watched Dexter before but we both wanted to start. Well of course Matt decided to start watching without me. He then told me he didn’t think I would like it because it was “pretty gory”. Well, as usual I didn’t listen to him and started watching it with him anyway…. and now I am obsessed. We are working our way through all the seasons that have aired, currently on Season 5. (Season 6 is said to start airing this fall on Showtime.)

Season 4 was amazing! On the edge of your seat, can’t sleep, scared to walk the dog at night, amazing.

John Lithgow’s performance is extraordinary. I will definitely be scared to death if I ever see him in a dark alley. (Lord Farquaad will also now always frighten me, and Brody happens to be on a Shrek kick at the moment too, talk about timing.)

I don’t want to give away any details, just in case you never watched the show and hopefully this blog gets you to.

Michael C. Hall is just incredible. He is really somewhat of a super hero; he is a serial killer who kills serial killers. I have seriously found myself crushing on him now too. He is tough, yet sweet…. creepy, yet sexy. 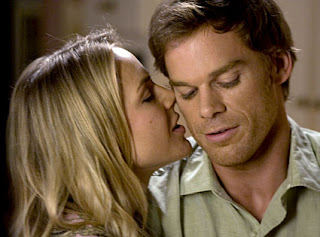 nitely pros and cons of watching shows this way though. I mean one thing is that I have been trying to avoid hearing any details pr spoilers. Which didn’t quite work, a friend of a friend slipped and said probably the biggest spoiler, so I sort of knew what was coming in the last season, but trust me, it was still amazing. (Luckily Matt didn’t hear her, he would have been so upset, he doesn’t even watch scenes because he doesn’t want to hear any spoilers.)

This is also tough because I am constantly on IMDB. I was instantly remembering the years Michael C. Hall won the Emmy for Best Actor and wanted to look it up to figure out which seasons he won for. Well, even just seeing a few pictures on Hall’s IMDB page ruined little plot points.

So as for my advice, stay off the IMDB page, don’t search #Dexter on twitter, and start watching, from the beginning. Enjoy! (and you can comment here and talk to me when you are unable to sleep at night!)