I’m excited to participate in another I Can’t Believe It’s Not Butter Toast & Tweet Twitter Party this Tuesday, July 19th from 8-10pm. I’ve participated in one of their twitter parties previously and had a blast, along with gathering some great recipe ideas. 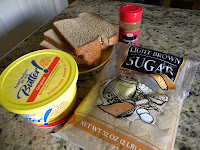 Before the twitter party, we were invited to try out a few quick and easy breakfast recipes. With a bunch of picky eaters in my household, French Toast is always a favorite that I know I can get all my boys to eat (yep, hubby too). I chose the “Easiest Ever French Toast” for our Sunday morning breakfast. I already had all the ingredients in our pantry and this recipe looked like it was quick, easy and had little clean up needed.

It took less than 5 minutes to gather all the ingredients, mix and put on the toast. In fact, I think the toasting process was the longest part of this recipe! We added a banana and some sausage to round out our meal. The Best French Toast recipe doesn’t quite taste like French Toast as we could definitely tell the egg was missing, but in a pinch this makes for a nice substitute. In fact, I think if we used the butter, brown sugar and cinnamon mixture on real French Toast I would be in heaven! 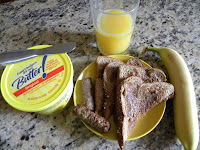 *Disclosure: I am participating in the Toast & Tweet and received a sample kit from I Can’t Believe It’s Not Butter for my participation. All opinions and experiences are my own, your may differ.