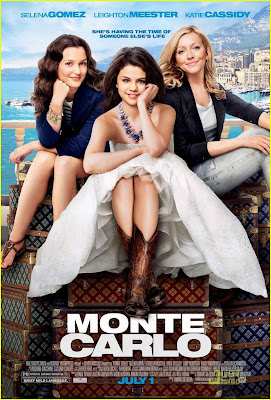 I can’t even begin to put into words how excited my daughter and I were to have the opportunity to meet teen sensation Selena Gomez and talk to her about her new movie Monte Carlo (in theatres on July 1). Click here to view the Monte Carlo Movie Trailer.

About Monte Carlo:
MONTE CARLO, tells the story of young girl (Selena Gomez) who becomes an accidental heiress when a summer trip to Paris with her friends (Leighton Meester and Katie Cassidy) turns into the fantasy of a lifetime, and through a case of mistaken identity, gets to live like royalty. The story kicks into adventure mode when a million-dollar necklace goes missing and the girls must scramble to find it.

I had a chance to screen Monte Carlo last Friday and thought the movie was a cute, light, feel good, summer girly movie.

Meeting Selena Gomez
Our day started at the beautiful Four Season Hotel in Philadelphia where along with a small group of local press we met and interviewed Selena round table style.

We were all seated when she walked into the room and the look on my daughters face was priceless. My little Selena fan had a smile from ear to ear. Once Selena was seated we went around the room and introduced ourselves. I introduced myself then I introduced my daughter, Vivian, as one of her biggest fans. Selena replied.. “Hi, Vivian, you are so cute, I love your name and your dress”, well… that very sentence put Viv into orbit. Selena Gomez..SELENA GOMEZ just spoke to her and knew her name… Whoa!

I got to sit right next to her at the conference table. She is absolutely beautiful, very sweet, has a good sense of humor, and I really got the impression that she knows who she is and is comfortable in her own skin. She seemed very “real” and grounded by a strong family relationship. I left the hotel with the feeling that she genuinely appreciates all of her success and fans.

Throughout the course of the interview we learned that Selena graduated from high school last year. She had an on set tutor while filming Wizards of Waverly Place. When asked if she would like to continue her education she said that right now she is booked for movies and music for the next two years, but that she loves to cook and bake. She doesn’t get to do it that often, but really enjoys it when she gets a chance. She said someday she would love to attend a culinary school.
Selena loves to travel. Monte Carlo was filmed in Hungary. Selena said that she really enjoyed her time there and liked being able to walk around and pretty much go unrecognized.

Some of the projects that Selena is working on are:

Her “Dream Out Loud.” clothing line, sold exclusively at K-Mart stores. The line consists of shirts, shoes, accessories and more. Selena said she picks out fabrics that are soft and comfortable and very much her own style. My daughter is quite the little fashionista and being a Selena fan asked on the way home if we could stop at K-Mart and buy “Selena’s clothes”.

Her new CD, “When the Sun Goes Down” being released on June 28th. This is the third album for Selena Gomez and the Scene and features the girl anthem “Who Says”. During the interview I asked Selena who her favorite artists and musical influences were and she said she really likes “Pink, Katy Perry and music with a positive message”.
We also chatted about her upcoming summer tour. She is really excited about the tour and the opportunity to see her fans. Selena is returning to Philadelphia on August 19th, performing at The Mann Center. Click here for concert details. If you can’t make the Philly concert, she is also performing at Hershey Park on August 21st. Click here for details.

I asked Selena when she isn’t filming or recording an album, what a typical day for her is like. She said she likes to sleep in! She relaxes by watching Friends re-runs and spending time outside.

After the interview Selena was pressed for time as she had radio interviews then her big event at The King of Prussia Mall, but she made time to pose for two photos. One group photo and then she pulled my daughter aside and posed for one with just my daughter. 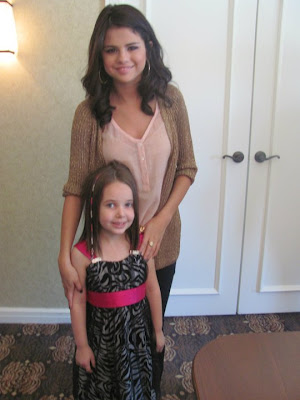 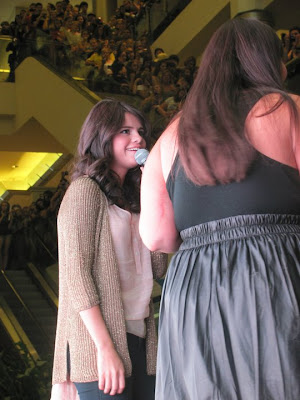 There were an estimated 5000 fans at this event. I was next to the stage and got to see the crowd as Selena was seeing it. It was pretty amazing to look out into the crowd and see everyone singing along to her songs and cheering for her.

The girls in the front row told me that they were at the mall since noon. Selena didn’t take the stage until 6:30PM. Those girls waited all afternoon. True fans! 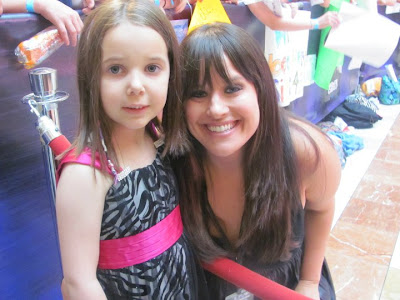 Nik the Web Chick from Q102 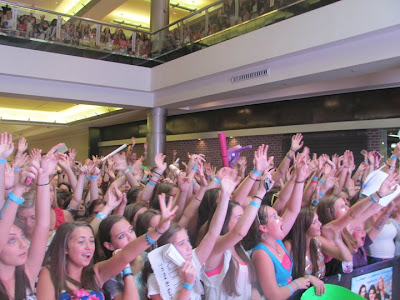 The Crowd singing “Who Says”

For more interviews and photos with Selena Gomez by local reporters and news sources: