This post is written by one of my oldest and dearest friends Bronwen Ward. Bron is the mother of two beautiful girls Hannah and Lily. Today is Lily’s Birthday and in honor of her Birthday I wanted to share her story and help draw awareness to a cause that my friend Bron has been campaigning for the past few months. 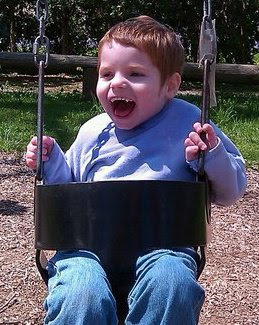 Lily has a smile that is infectious. It’s big and bright and totally pure. Her laugh is amazing. She makes the people around her smile and laugh with her. Lily has red hair, big blue eyes, and skin so pale she is practically translucent. She looks like an angel, and she is. Lily has Angelman Syndrome.

Angelman Syndrome (or AS) is a neurodevelopmental disorder affecting approximately 1 in 15,000 births. Although the cause of AS is known, there are currently no treatments available for this disorder

Lily was diagnosed with Angelman Syndrome at ten months old. She was diagnosed through genetic testing, after visiting multiple doctors because of reflux; physical therapists because of unmet milestones; and a general feeling of “something just isn’t right”.

When your pregnant with your second child, of course everything will be perfect. Just like the first time. Plans are made. Everyone is excited. Big sister, Hannah, has such plans for the new baby. Hannah has decided that they will be best friends, become veterinarians together, and raise their families together. Pregnancy, labor and delivery are all fine. It’s the after that’s not.

When you have a baby, there is no ceiling. The sky is the limit. Everything and anything is a possibility. After a diagnosis like Angelman Syndrome, you have to rethink your lifestyle, your life plans, your everything. I went through a mourning period. I mourned for the fact Lily would never get married, never have babies. I mourned for the fact that life would be harder for her. She would have to struggle to do the simplest tasks. I was so sad for Hannah, that her dreams for her sister would not come true. Amazingly, she told me, at the age of six, that it was alright if Lily couldn’t become a vet. Lily would live with her, and she, Hannah, would take care of Lily. I’ve discovered over time, that, you have these dreams and hopes, but they are flexible. They are ever changing. I was sad and heartbroken, but Lily was happy and loved. She helped fix me.

Lily will be six in August, and we are at the five year anniversary of our diagnosis. I say “our” because we are a unit. My husband, Adrian, my eleven year old, Hannah, myself and Lily. Having a marriage is hard already. Throw in a child with a disability, the fact that I had to quit my job so we are down to one income and the craziness of everyday life; it’s sometimes hard to keep our “unit” in working order. A sense of humor is a must. If you’re not laughing you’re crying. Sometimes we do both at the same time.

Lily has yet to walk unassisted, but is “cruising” around holding onto furniture. She was late to roll (18 months), to sit unassisted (2 ½ years), and to pull to stand (5 years). Because she is so mobile now we have to blockade her into a “lily proof zone” in the living room. She has been involved in PT and OT since she was six months old and we have seen some incredible progress. Whether it’s struggling to pick up a toy, to step sideways along the couch, or to get a cheerio into her mouth, she does not give up. Lily perseveres, and that shows her character. It may take her longer to get there, to learn the skill, but that makes the feeling all the sweeter when she does. You never take anything for granted as the parent of an Angel. Every milestone is a reason to celebrate.

Lily had her first seizure at the age of one. We were told to expect them but we didn’t know what kind she would have. Lily gets “drop” seizures, or atonic seizures. She would be happily playing one minute, and the next go limp, and crumple to the floor. It was heartbreaking to see and very upsetting and scary for her sister. We have her seizures under control with multiple medications, which we give to Lily like clockwork. When she has a break through seizure we take precautions to keep her safe until they are under control again. I consider us lucky. The Angelman community has lost Angels because of uncontrollable seizures, and that is heart breaking.

My Angel has never spoken a word, but she talks all the time. I describe it to people as chirping, squealing, and squawking. She has no problem interrupting your conversation and sometimes we just can’t get her to zip it. I sometimes have dreams where she talks to me and her voice is tiny and sweet.

Lily is tiny, only thirty pounds. It’s hard for her to gain weight because she does not eat much solid food. She is fed mostly by bottle with the occasional pick-up of cereal or diced fruit thrown in. Her GI system is in chaos. It has always been this way. She has a hard time holding down her bottles, and the tiny amounts of solids are worse. It’s reflux, the doctors say. She will out grow it. Uhh….when? They said that at a year, at three. Now they admit they have no idea why her body reacts this way. Nothing abnormal in all of the studies. This is just the way she is. So, we manage. We do a lot of laundry, and I keep meaning to steam clean the carpet more often. Frustrating, yes. But hopefully, someday, she will be able to eat what she wants, whenever she wants it.

Lily rarely sleeps. I’m not sure how much she actually gets, but somewhere between 3to 5 hours a night. She sleeps in an amazing bed that is totally safe, big and comfy. It’s high on all sides so she can’t climb out. Angels are amazing climbers. She spends the night thumping and banging around in her bed, very content with her nightlights, and African lullaby music.

Lily loves music. Heavy metal, reggae, and classic rock. She loves to “feel” it. She enjoys a good cuddle, and is the only six year old I know that will watch two hours of HGTV with me and not complain. She is always on the go and must be watched at all times. I’ve turned my back for a second and she’s chewing on my shoes by the front door, or splashing around in the toilet. Nothing is sacred in our house. If it can’t get thrown in the washer, we don’t get it. If it can’t be wiped down with a Clorox wipe, it does not enter.

I live in a world where there is no such thing as a good night sleep, where there are sleepers that zip up the back and duct tape on diapers. Where there are bite marks on all my furniture and I have a real live sock monster (yes, Lily eats socks). In my world, we don’t save for Lily’s college fund; we save for her trust fund. We don’t have play dates, we have PT. I live in a world where my eleven year old knows the names and dosages of all her sisters’ medications. It’s a crazy world; hectic, loud and sometimes smelly. I love it here. Yes, sometimes it would be great if things were a tad easier but it’s nice here.

I have a husband who loves/puts up with me. I have two beautiful daughters. Hannah, who has learned early that things don’t always turn out as planned, that you make the most of what you’ve got and that everyone is a person and deserves respect. These are things I didn’t learn until I was older, they are hard and sometimes difficult lessons to learn but she has done amazingly well. She is Lily’s protector, her cheerleader and the only one who can get Lily to eat when she is sick. Sometimes Lily will do something to annoy Hannah and I will hear the, “Mom! Lily just drooled on my ipod! Get her away me!” and I will smile because it’s a wonderful thing.

Lily is an Angel. She is a sticky, smiling, energetic, loud, and sometimes annoying Angel. She does not listen. She kicks you hard to say hello. She may nibble on you if she likes you. She gives love unconditionally and you cannot help but love her back. She is perfect just the way she is and she has made us who we are.

Bron is sharing Lily’s story in hopes that you will join her in supporting Foundation for Angelman Syndrome Therapeutics (FAST) and VOTE for FAST to win a much needed grant from Vivint Gives Back Project. Winning this grant would kick-start a clinical study in humans for an FDA approved therapy that has already reversed Angelman Syndrome in a mouse.

A few weeks ago, Golden Globe winning actor Colin Farrell discussed Angelman Syndrome and his support of FAST on Late Show with David Letterman. The actor revealed that one of his sons has been diagnosed with Angelman Syndrome.

He asked viewers to support FAST and talked about the opportunity to secure research funding money through the Vivent Gives Back Project.

Click here or on the banner above to vote for FAST. Vote today and everyday until August 27th. For help or questions on voting, click here.