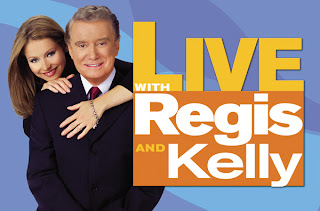 After 28 years, today is Regis’ last day on “Live! With Regis and Kelly” I have watched Regis for years; he really became part of my daily life a long time ago. I used to tape the show and now I DVR it every day at the very least watch Host Chat. It is a staple of my day that I can’t imagine not having. Even when Brody started to speak if there was a guest host with Kelly he would say “Where’s Regis?” (This was before he even knew how to say some family members’ names). Luckily Kelly will still be on, while they haven’t announced a new co-host yet, Kelly did sign on for another five years.

“Live!” has been building up to this day for awhile. There have been guests dropping in, like Kathie Lee Gifford, David Letterman, Robert DeNiro, and Vice President Joe Biden. 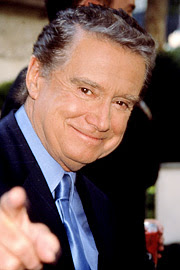 Regis, who is the most upbeat 80-year-old I have ever seen, said his career is not ending, even if Friday is his final day on the show. He has said ABC simply didn’t offer him a good contract. “Rather than get involved with another year-deal or whatever they wanted, I made up my mind to leave ABC,” Regis said in an interview Tuesday by phone on his way to a book signing for “How I Got This Way”, his latest memoir. “I didn’t walk away. They offered me something. The contract wasn’t that alluring. I understood that ABC felt like it needed to move on but this was not a classy way to do it,” he said.

Despite the inevitability of Regis’ decision to move on, he has understandably mixed feelings. For a while Regis explains, “every time a new contract came up, I would say to myself, ‘Maybe it’s time to get out.’ Then I would say, ‘Aww, what am I going to do? I might as well continue. I really would like to do something else before I quit. And frankly, I’d like to have a little time off. I started in 1955 as (an NBC) page over at 30 Rock, so it’s been a long time.”

Regis’ wife Joy is supporting his decision, he says, “But I think she’s kind of worried.” Joy says, “He’s going to be home all day. What’s he going to do?” “Frankly, I think she’s a little concerned about it, to be honest with you, and I don’t blame her.” 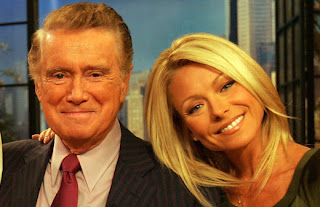 Joy will be seeing more of Regis, and while we can hope to still see him, I can tell you I will miss seeing his face on a daily basis. Regis has brought a smile to my face for years and he is an inspiration to us all. He has had an incredible career and I can’t wait to see what he does next.

Grab your tissues for today’s show, it sounds like you will need them. I will definitely be emotional watching Regis celebrate his final day on “Live!”

Next week will start off with Jerry Seinfeld guest hosting with Kelly for three days. They will be trying out guest hosts until they find (or announce) Regis’ replacement.